Whether you’re a lifetime drag enthusiast or a RuPaul’s Drag Race newbie, there’s a lot to learn about the wide world of drag. 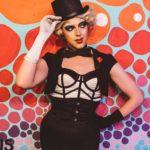 Join us for this four-part series exploring drag performance across the country, featuring artists and venues with unique regional identities.

It’s nothing new that drag is one of the Windy City’s leading forms of entertainment – Chicago queens have made the top three in four seasons of RuPaul’s Drag Race and have been represented nearly every year since the competition began in 2009.

From Pearl to Shea Coulée, the Princess to Jade Sotomayor, the Chicago queens that have made it to the small screen do a good job of showcasing the wide variety of drag performance that can be found in Boystown and beyond. Just ask Beverly, frontwoman of the queercore band Bev Rage and the Drinks.

Chicago queens will never cease to surprise you. According to Bev, “There are a million and one drag queens here, so we all find our niche. Our community is strong and always growing.”

Bev’s typical scene isn’t so typical. “Chicago has so many great places for bands like us to play,” she says, “from basement DIY spaces to larger music venues.” If you have a taste for punk, check out Empty Bottle, Township, Schubas Tavern, the Dojo, the Shack, Cole’s, or the Auxiliary Art Center. They’re all queer-friendly, and will give you a taste of Chicago neighborhoods like West Town, Ukrainian Village, Logan Square, Lake View, Avondale, and more. Empty Bottle also hosts an alternative queer music night, Glitter Creeps, every third Wednesday of the month. 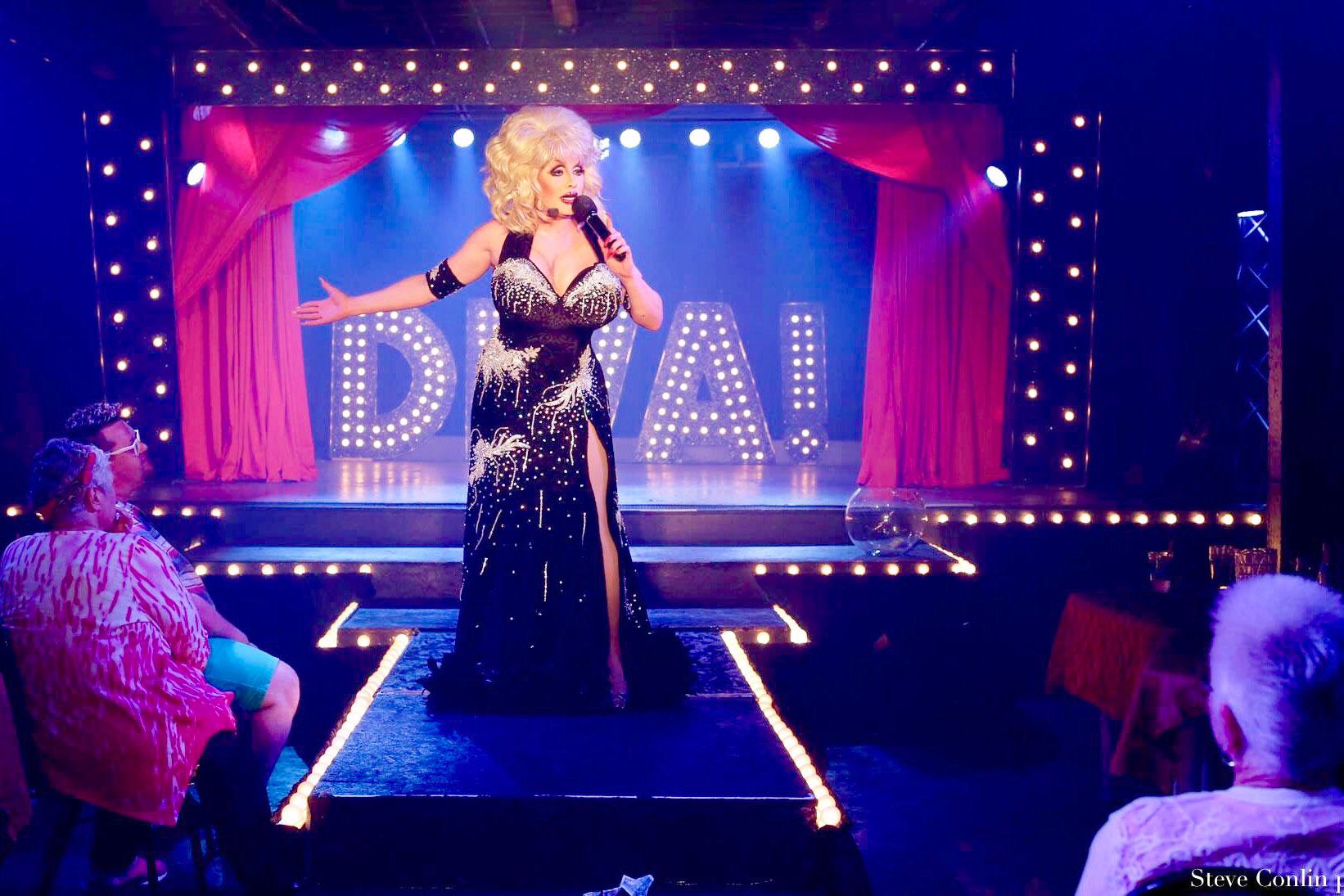 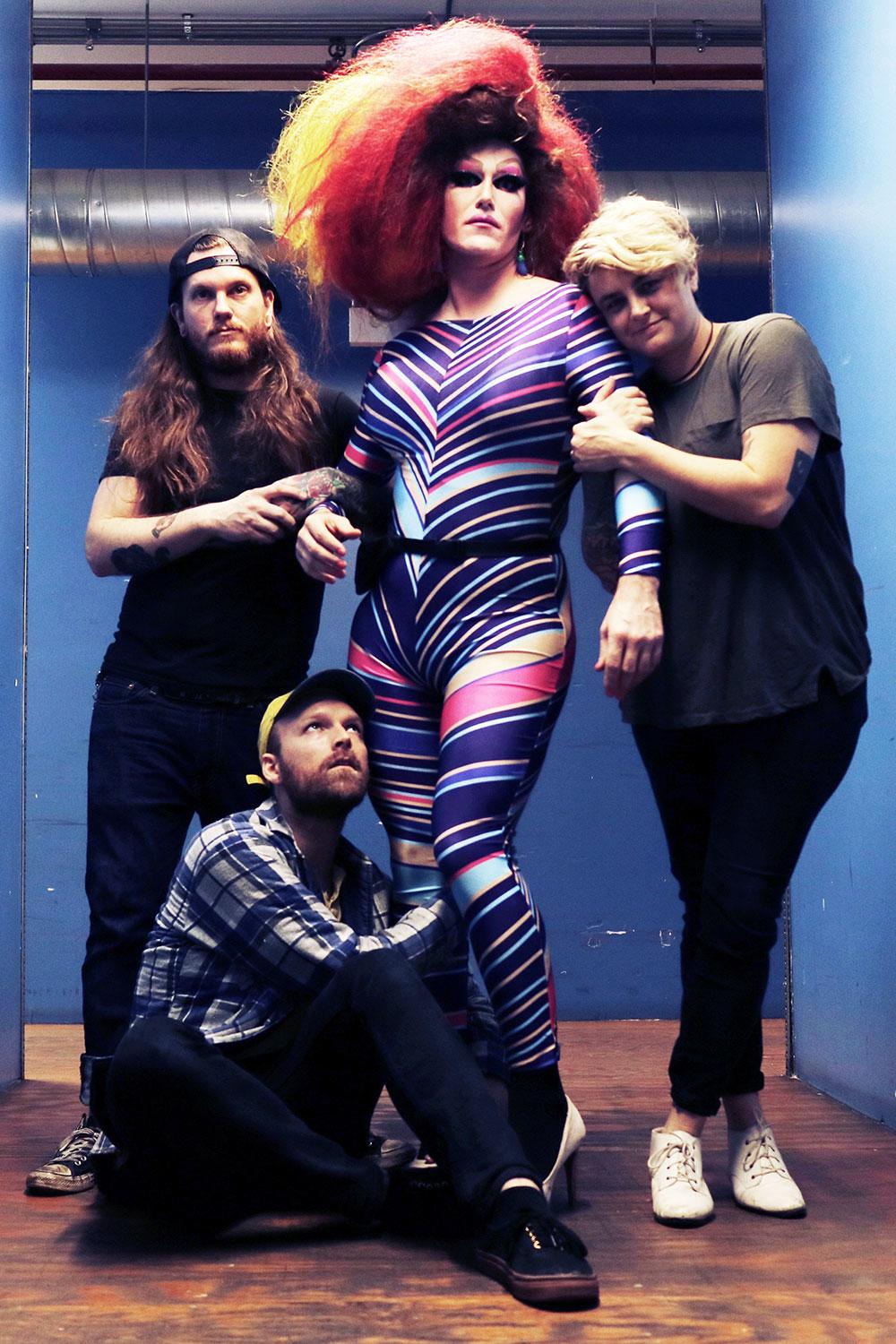 “There are so many amazing bands, queens, artists, and weirdos here in Chicago,” says Bev. “You can find the entire spectrum of drag, which is pretty exciting.” Her other recommendations include: 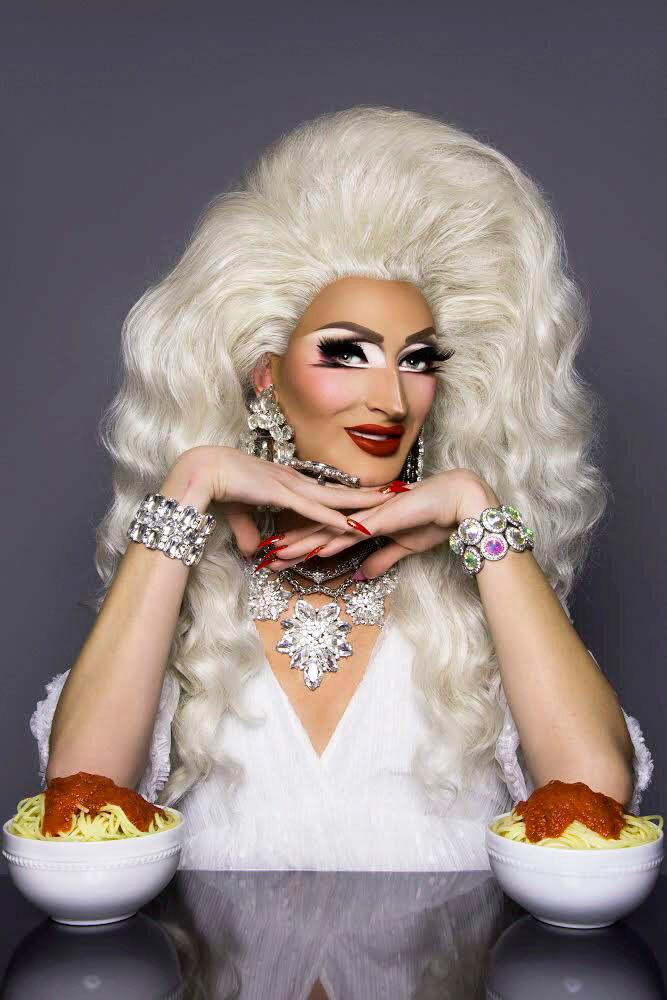 If New York queens are known for their duckwalk and southern queens are famous for death drops, then Chicago queens can be clocked by their face. Some of the most iconic makeup looks to emerge from drag performance–from Kim Chi’s anime artistry to Trixie Mattel’s Barbie realness–have called Chicago stages home.

If New York queens are known for their duckwalk and southern queens are famous for death drops, then Chicago queens can be clocked by their face.

For an idea of just how creative these girls can get, check out Chad Sell’s artwork. Famous for his comics and a recent board game (Drag Ball), Chad is well known for his illustrations of Drag Race queens. His superfan opinion of who shouldn’t be missed? The live singer Dixie Lynn Cartwright and fashion icon/pop star imp queen.

By now, you’re probably noticing your nights in Chicago will be late, loud, and maybe even lewd. For some more classic performances, you’ll want to head over to…Utah? 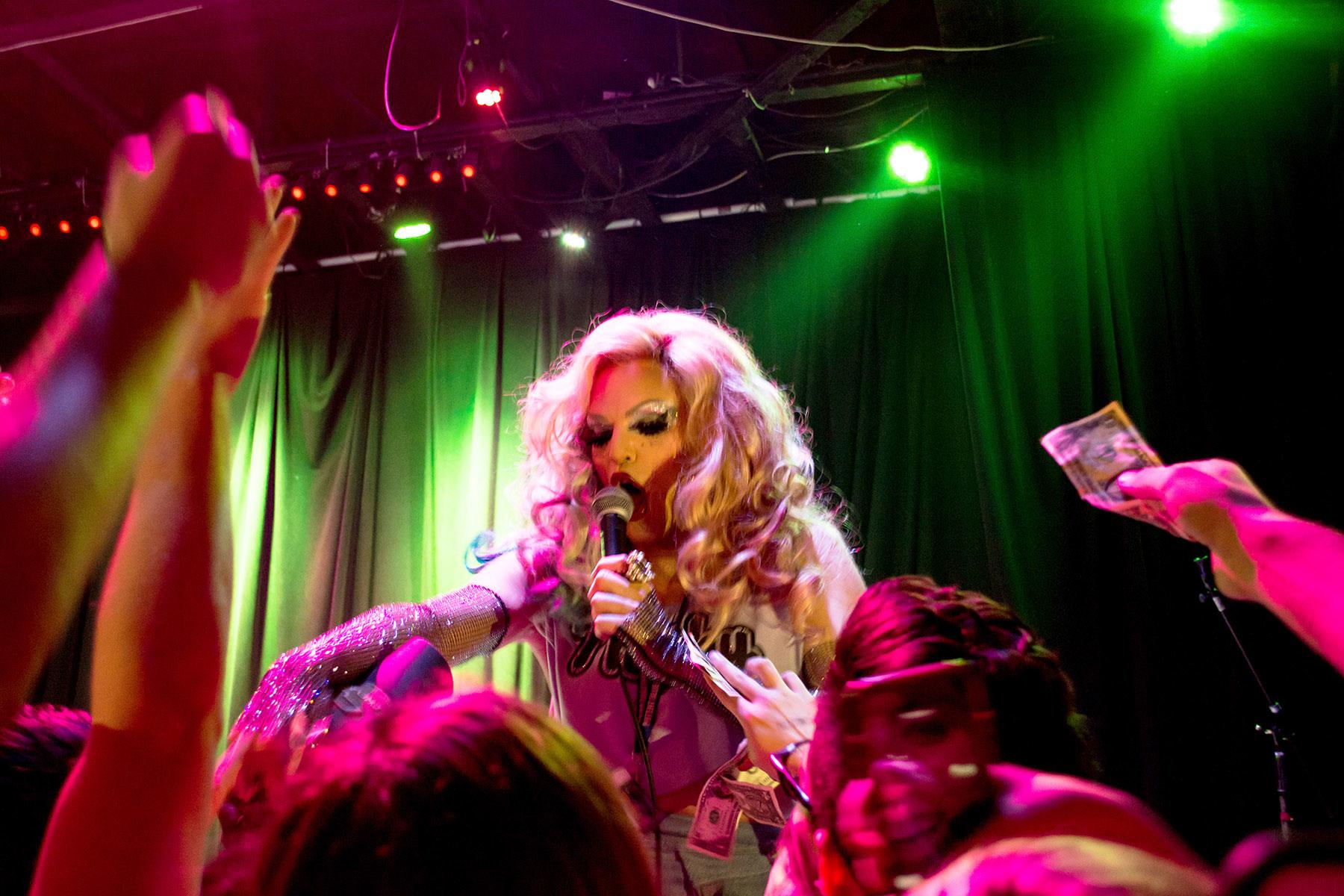 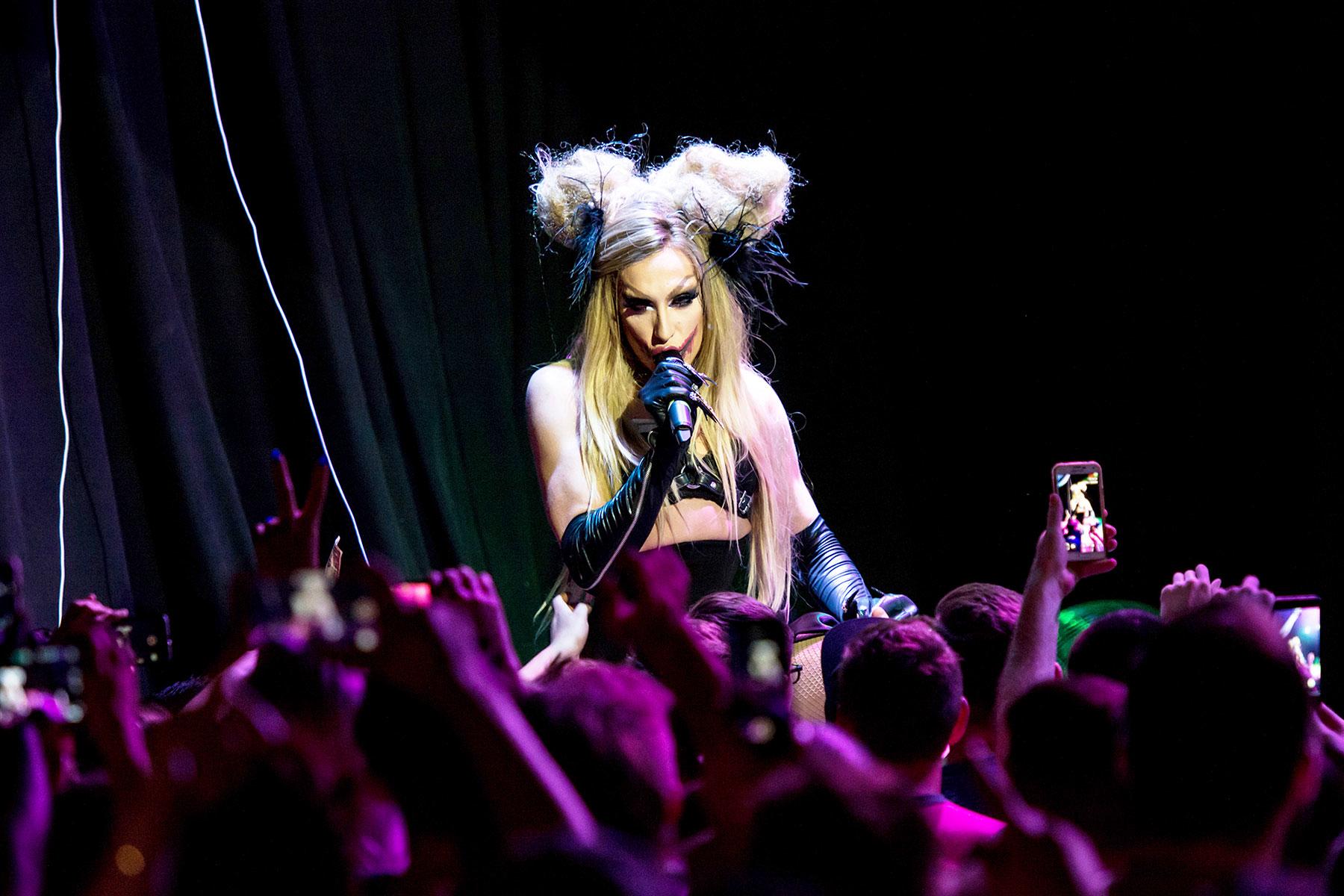 You may not have realized that Salt Lake City sits at seventh place in a list of the top 50 metropolitan areas with the highest number of LGBTQA+ residents, according to a Gallup poll released in 2015. In fact, 4.7% of adults there identify as part of the community–which puts SLC ahead of Los Angeles as a home base for queer folks.

Club Try-angles, on West Harvey Milk Boulevard, features leather and bear nights each month, as well as BBQ Bingo with the Matrons of Mayhem every first Sunday. The nearby Metro Music Hall, formerly Metro Bar, features weekly gay events as well. Meanwhile, Club JAM, in the city’s Marmalade District, features queens like Kay Bye and The Whore of ’94. The nightclub was featured in local media this year for offering an olive branch to the region’s Latter Day Saints church community as new management attempts to build bridges and understanding. It’s like RuPaul always says, “Drag brings people together.”

We’ll wrap up this journey in the Lone Star state, where the limits of drag style stretch as wide as their borders. For instance–has your hometown queen ever been featured at a theme park?

If you’re looking for a city that’s breaking out of its pageant roots to showcase a newer, wilder kind of glam, San Antonio is your pick. Known for being the place where the late Erica Andrews got her start, the city now holds space for queens exploring the avant-garde while honoring their pageant roots. 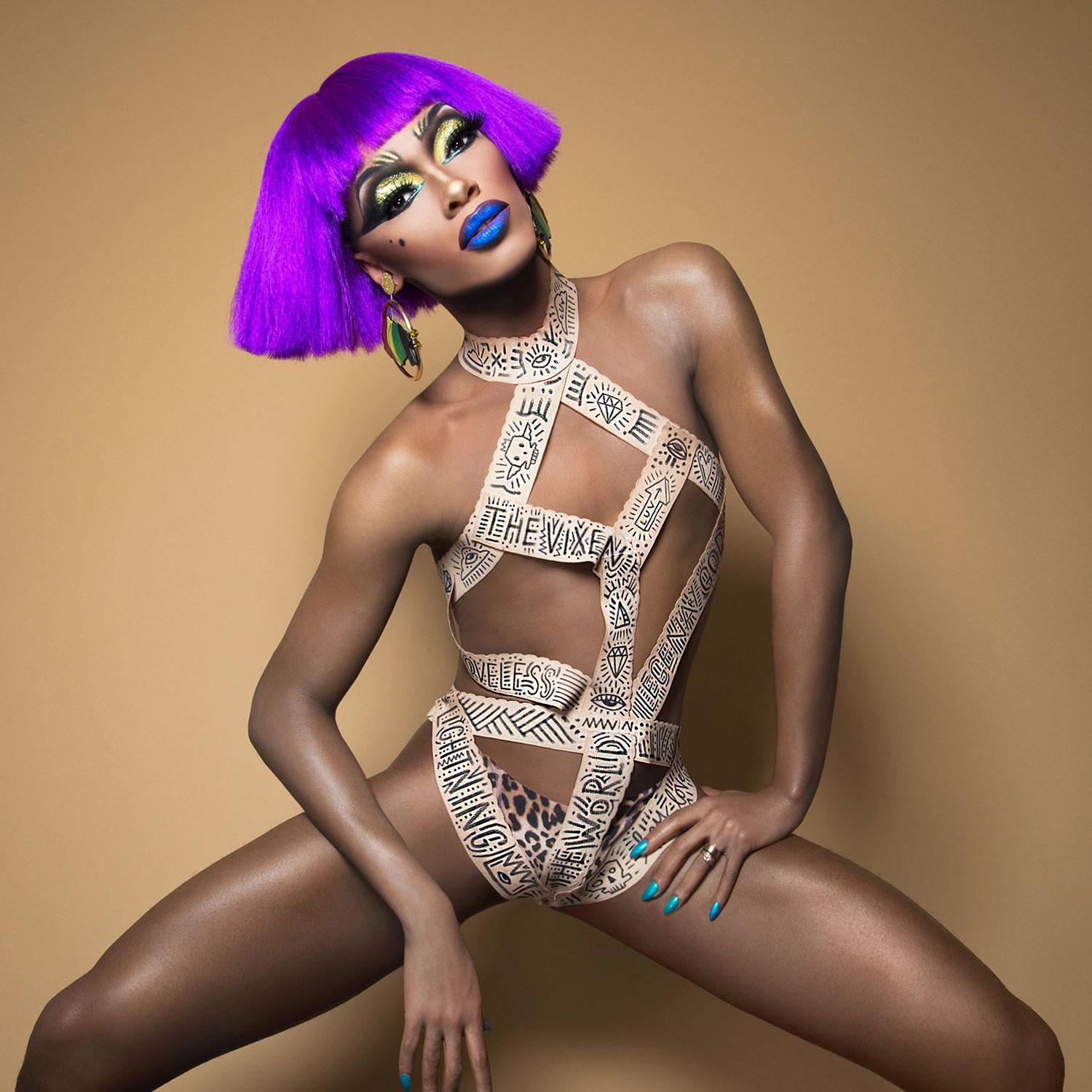 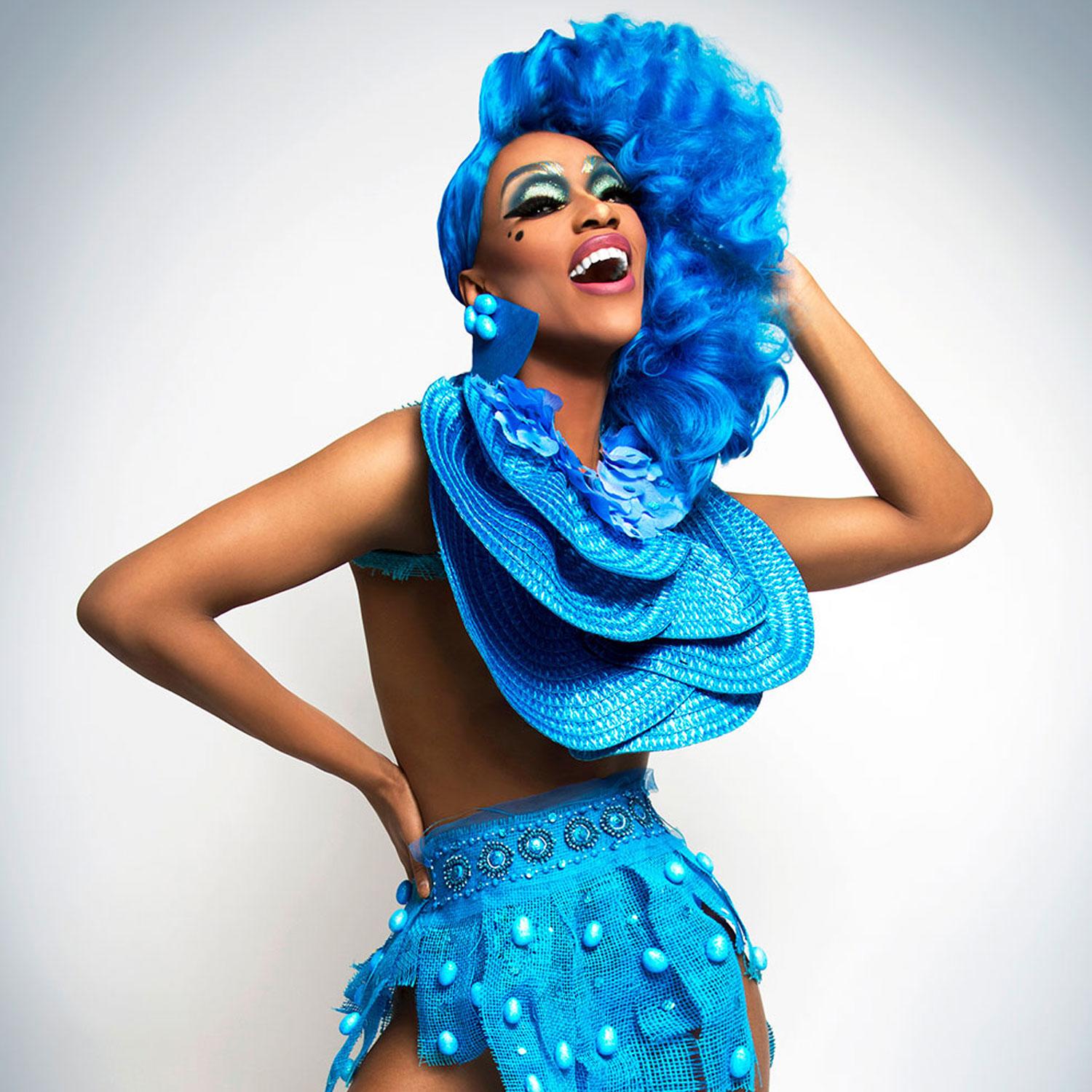 Take Miss Taint, a “glamorous creature of the night” who’s been featured at Out in the Park at Six Flags Fiesta Texas and on the cover of Current magazine. She calls herself “the face of all things tainted that are unconventional or judged by first glance,” and she’s one of the performers leading the revolution.

“As the drag scene is evolving with a new generation watching shows such as RuPaul’s Drag Race and the Boulet Brother’s Dragula, more venues and bars are opening their doors to all kinds of performance artists,” says Taint.

“I believe the most rewarding aspect of doing drag in San Antonio is using my platform to encourage others to be more comfortable with being themselves, and that it’s okay to be a little different sometimes,” Taint says. She aims to make her shows a “safe haven” for queens with a taste for pop culture, glamour, horror, and high adrenaline.

You can find more DJs and dance nights along the St. Mary’s Strip at venues like the Mix or Paper Tiger. But if you’re looking for a place to relax the morning after, Miss Taint suggests San Antonio’s scenic Japanese Tea Garden, built in 1901 and reopened in 2008. It features stone bridges, lots of green space, a koi pond, and the Jingu House Café. 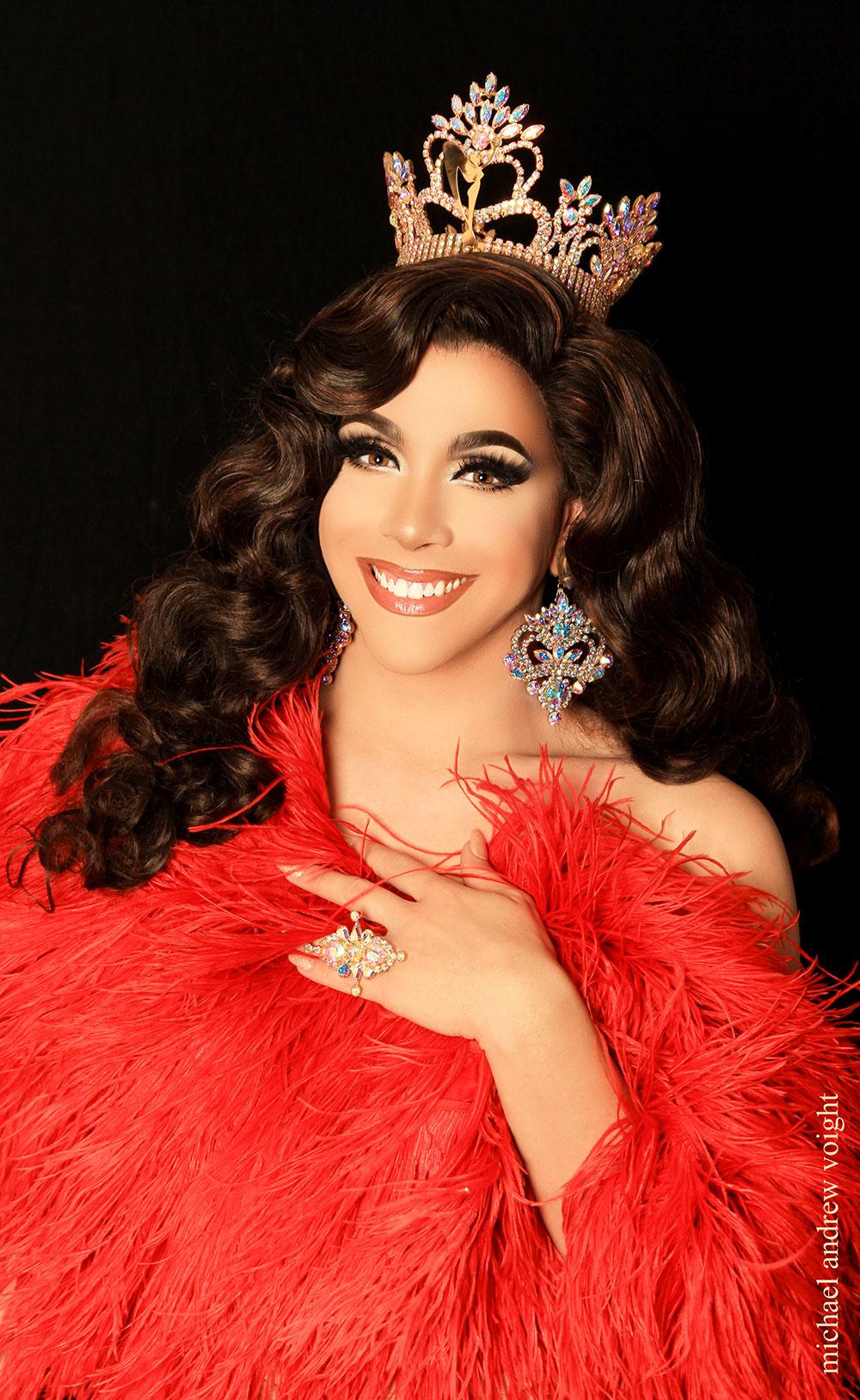 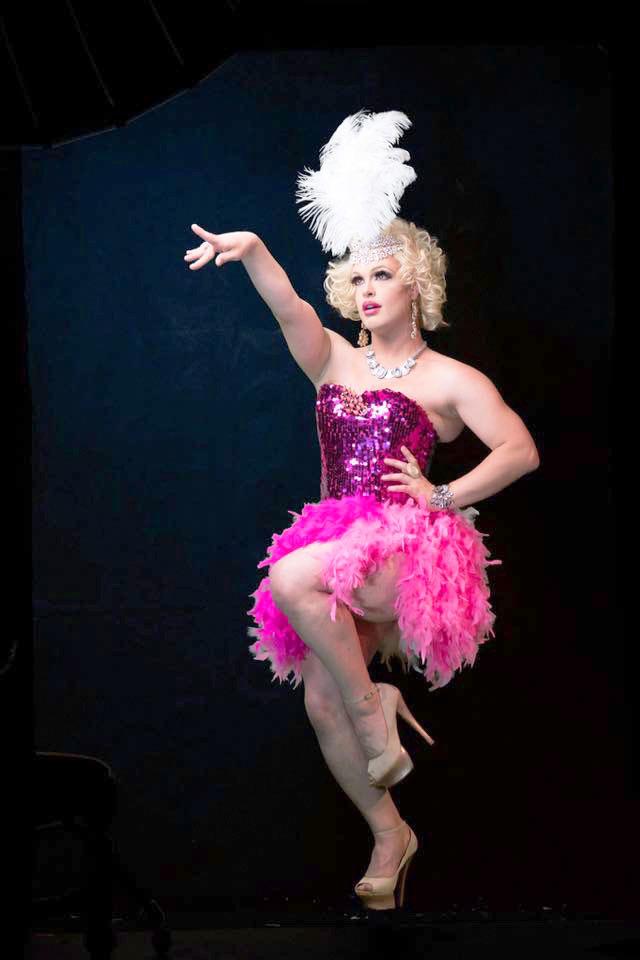 San Antonio may be breaking down the walls of what drag can look like, but it doesn’t have a monopoly on fashionable freaks. Head up to Austin to find performers like Christeene Vale, a “gender-bending, booty-pounding perversion of punk.” Known for her striking yet minimal makeup and music video collaborations with PJ Raval, Christeene brings drag and musical performance to a wider demographic of viewers. Her popularity on local stages and at regional film festivals has led Christeene to call herself a “growing pandemic.”

Another undead Austinite is Louisianna Purchase, who’s been voted the city’s best drag performer. She’s been featured in shows like Die Felicia! at Badlands and seen on stage with co-host Zane Zena and drag supermonster Vander Von Odd (of Dragula fame). Yet her performances at Highland, Austin’s premier gay nightclub, show that filth glam drag dating back to Divine has an increasing audience in the queer community and beyond. 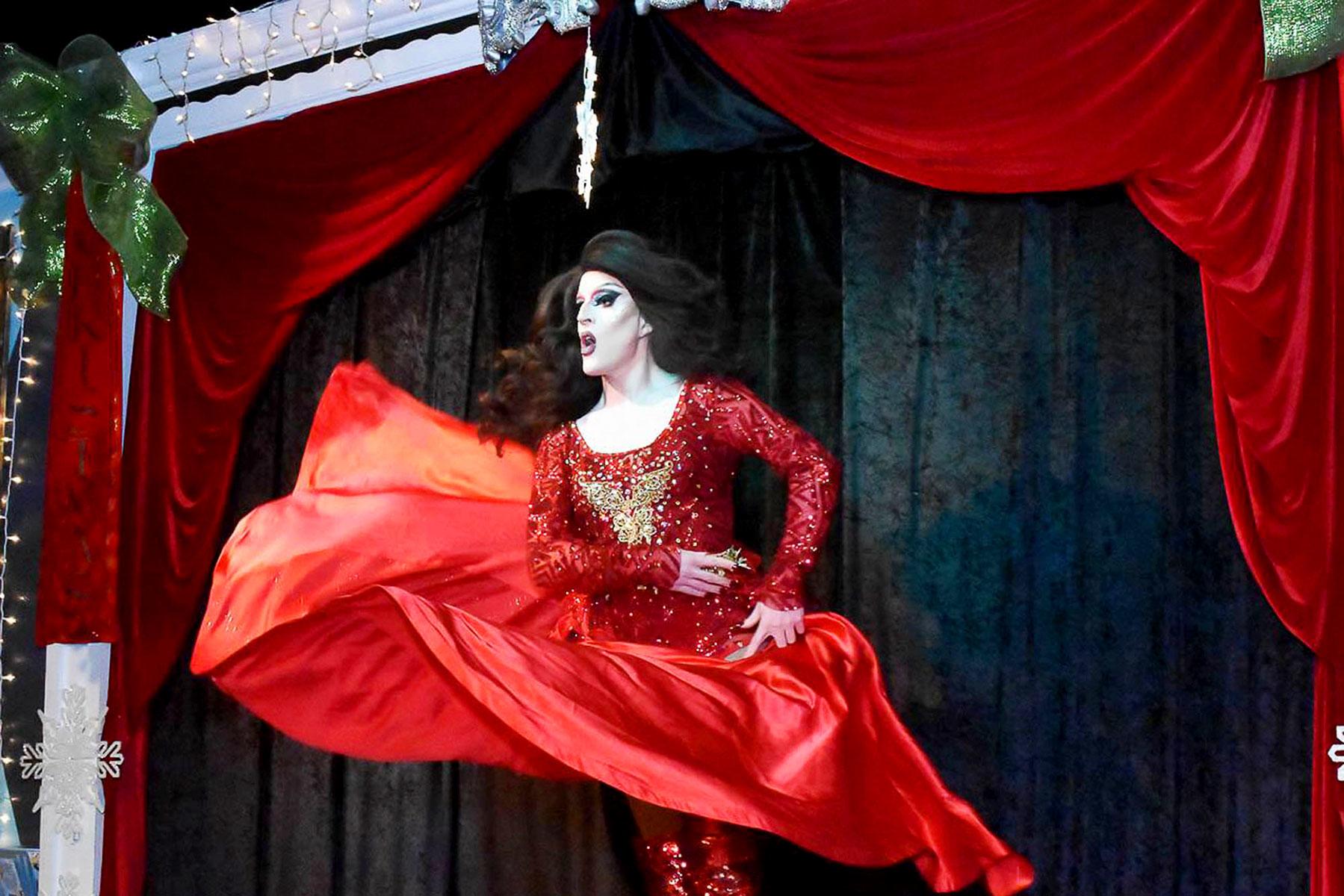 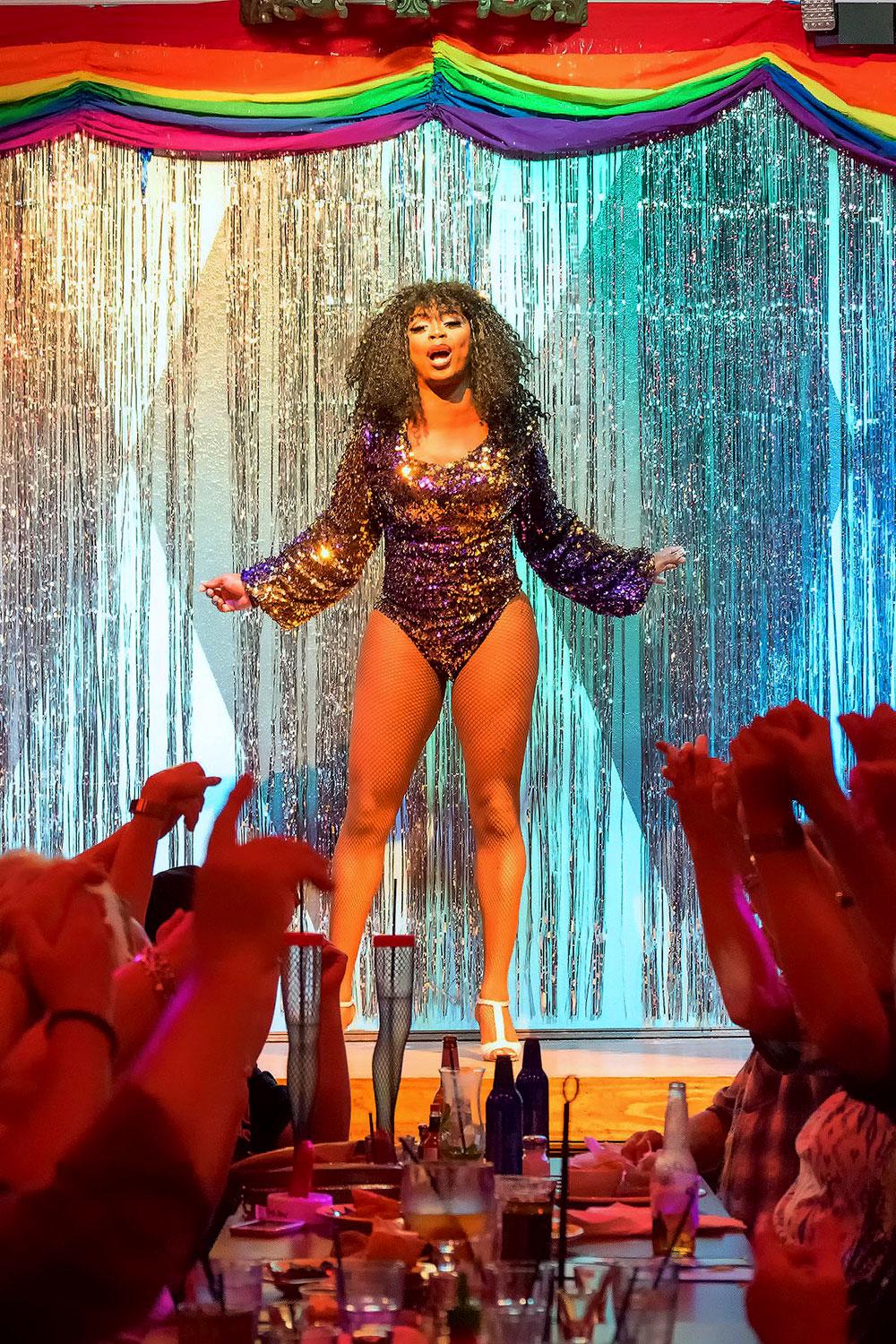 When Alyssa Edwards and Laganja Estranja sashayed their way onto the Drag Race catwalk, one thing became clear: Texas queens don’t play. Whether it’s through high-minded performance art or high kicks and splits, drag performers in cities like Houston and Dallas bring their all to the gig.

This year’s Miss Gay Texas America, Violet S’Arbleu, is no exception. You can find “The Thinking Man’s Drag Queen” every week at JR’s on Tuesdays, South Beach on Fridays, Michael’s Outpost on Saturdays, and Hamburger Mary’s on Sundays. Audiences know this working woman for her live singing and fashion-forward costumes, but she’s also got three other pageant titles under her belt: Capital City USofA Newcomer 2013, and Outsmart’s Most Divine Drag Queen and F.A.C.E. Awards Drag Queen of the Year, both from 2015. Find other Houston drag standouts at Guava Lamp, the city’s “modern gay bar.”

In Dallas, the Rose Room at Station 4 features well-tipped headliners like Layla LaRue and Cassie Nova, while Randy’s Club Cherries is home to Texas All American Goddess at Large, Whitney Paige. Looking for something a little more underground? Dallas is also home to some taquería “travesty shows” with frontwomen such as Gaby Duarte, Chantal, and Karina Duarte—check out Los Altos de Jalisco on Abrams Road.

Last, but certainly not least, you should know that Dallas stages aren’t just about the ladies. Mustache Envy, a troupe of drag kings, and Queerlesque’s Gendernauts take drag and gender play to new heights in spaces like Sue Ellen’s, the premier ladies bar in Dallas-Fort Worth.

11 Weird and Wonderful Things to See and Do in Peru

Buenos Aires’s Best Tango Show Is in Its Funkiest Hotel

15 Reasons to Visit the Weirdest House in Wisconsin

Please don't close or refresh the page while we are processing your submission
Please be patient, this could take a few minutes.